Posted at 12:30h in Uncategorized by scienceaward 0 Comments
0 Likes
Share 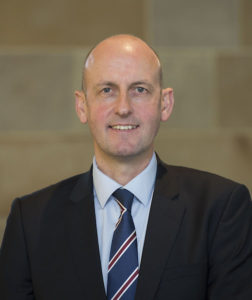 2017 was another great year for the life sciences in Scotland.  Here, Dave Tudor, Chair of Life Sciences Scotland Industry Leadership Group and Head of GMS Strategy at GSK, reviews some of the highlights.

It’s been an extremely successful 2017 for the Life Sciences sector and I am delighted to have this opportunity to reflect on just some of the many great things we should all be proud of.

Last year was strong on growth, with a record £152m of investment in our sector and we continue to lead the world in medical innovation, with nine companies reporting positive results from products in clinical trials.

Supporting the Life Sciences Strategy for Scotland, refreshed last February, we also launched a very exciting roadmap to show how new technologies will support the delivery of sustainable production.

Our global reputation continues to grow with the announcement of 3 significant international collaborations in addition to the establishment of company offices, subsidiaries and contracts in the US.

Finally, it was fantastic to see so many people attend our first sector conference, which together with our new website – lifesciencesscotland.com – and the annual awards dinner gives us three brilliant opportunities to stay connected, share, grow and succeed.

Please take the time to read on as I give you more detail of our 2017 successes.

Last year saw a record £152 million invested in the life sciences sector – a clear indication that Scotland remains a good place to access risk capital, with the most active business angel network in the UK, a dedicated £47m life science venture capital fund, and co-investment from the Scottish Investment Bank.

Sorrento Therapeutics announced its acquisition of Virttu Biologics. Concept Life Sciences continued to increase its presence in Scotland with the acquisition of Edinburgh spin out Aquila Biomedical in October – investing £250K in new equipment at its East Kilbride analytical services site. And to ring in the new year, Canon Medical Systems Corporation completed its acquisition of Toshiba Medical Systems Corporation with the launch of Canon Medical Research Europe Ltd in Edinburgh. Not to mention, Eurofins’ acquisition of Ashwood UK as part of the further expansion of Eurofins’ food testing portfolio, while Solid Form Solutions has very recently been acquired by Avista Pharma.

Besides the great returns for shareholders, this level of acquisition activity goes to show the real quality and attractiveness of Scotland as a leading location to build a thriving life sciences business.

Export ambitions will be given a boost thanks to BASF announcing a £2.8m investment in its Calanish facility.

In the fight against Alzheimer’s disease, Merck announced a £1.3m expansion of their facility in Irvine. Meanwhile, Lonza announced the completion of their expanded clinical trial capabilities, as well as increased development and manufacturing capabilities for specialized drug products utilizing liquid-filled hard capsule (LFHC) technology at its Livingston facility.

We shouldn’t forget the local players who have been on a growth path too. TC Biopharm and Lamellar Biomedical announced expansion of their operations at Maxim Office Park. Synpromics moved to new larger facilities at the Roslin Innovation Centre. While Clintec announced an expansion of their headquarters in Glasgow, being awarded a Queens Award for Enterprise 2017, in the category of International Trade.

Omega Diagnostics achieved CE-Marking of its VISITECT® CD4 test for supporting the management of people living with HIV. In December, Novabiotics was awarded the most innovative EU Biotech SME.

To encourage growth in the sector, Scotland has invested in infrastructure to underpin innovation. Construction is underway for the new £50m Centre for Tissue Repair at Edinburgh BioQuarter, which will focus on how the body repairs its tissues after injury, seeking new therapies for debilitating diseases of the brain, liver, lung and blood. ‌Opened in March 2017, the Imaging Centre of Excellence (ICE) houses the UK’s first ultra-high field 7 Tesla (7T) MRI scanner, located in a clinical setting at the Queen Elizabeth University Hospital, the largest acute hospital in Western Europe.

Sustainable Production is a Key Theme for the Life Sciences Strategy

In 2017, an innovation roadmap was launched highlighting the sector’s ambition in continuous manufacturing, industrial biotechnology, cell and gene therapy, and automation. We’ve also seen the successful launch of the Life and Chemical Sciences Manufacturing Leadership Programme. With 2018 underway, the second cohort will be put through their paces from late January, with the aim to fulfil the increased need for strong leadership within these growing sectors.  What’s more, the Centre for Crystallisation and Continuous Manufacturing (CMAC) has recently welcomed Pfizer as a Tier 1 partner.

Symbiosis pharma opened a US office in Massachusetts in 2017 and Synpromics established a US subsidiary in January 2018. While in September, NHS Research Scotland, supported by Scottish Development International, led a mission to the US to promote Scotland’s world class clinical trial infrastructure.

In pharmaceutical services, artificial intelligence leader Exscientia announced a collaboration with GSK, and Sanofi. Meanwhile BioAscent announced an agreement with Pivot Park Screening Services to manage their library of over 300,000 compounds.

In addition to launching our new website our new social media channels have launched to provide news and information on all aspects of the life sciences sector.

The Scotsman’s Life Sciences Conference in November, highlighted the opportunity for Scotland’s life sciences community to help realise our strategy ambitions for the sector.

In summary – what a year it’s been. We look forward to updating you on the many exciting developments as 2018 unfolds.

Sign up to the monthly Life Sciences Scotland newsletter to keep up to date with all the latest news and events from our vibrant sector.